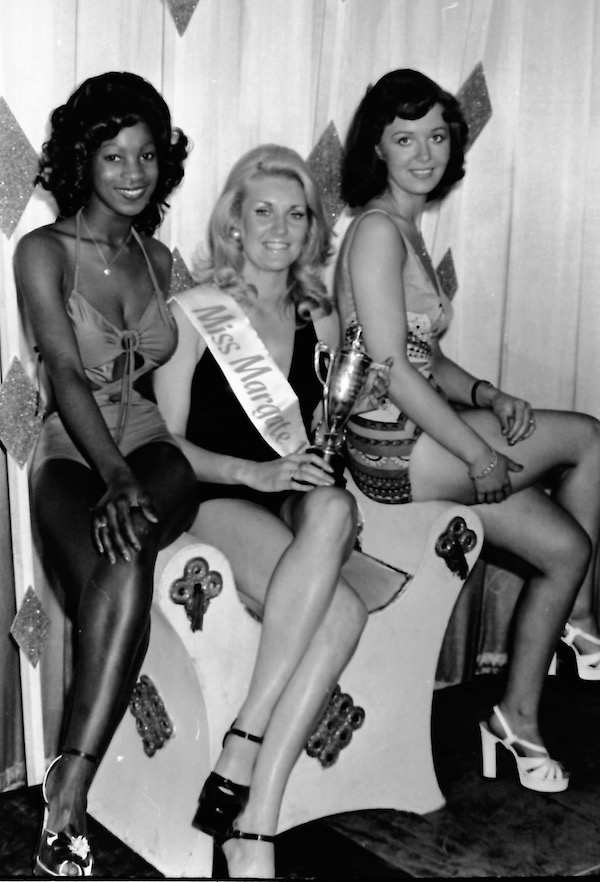 There is little doubt that Margate was a very white place in the 1970s. The demographics show that the area still has a very small number of black or Asian residents. Black and Asian daytrippers from south and east London were a regular sight on the seafront, but the numbers who chose to stay and make a home in the town were small.

This picture of a Miss Margate show at the Winter Gardens in 1975 is the first sight I have had of a black woman taking part in a Margate beauty competiton. I assume the woman on the left is runner up to winner Pip Neale (centre) here. But I do not have a name as yet. Click on the picture to see it larger. Do you know her, or know someone who may know her?

It is quite likely that the woman in question was part of the groups of women who entered the local beauty shows while not living in the area. In the heyday of beauty shows, many women spent the summer travelling from town to town and entering shows. Women from London, Essex and the Midlands regularly took part in Margate beauty shows. There was a decent living to be made if you were placed and it sure beat working in a factory, digging potatoes or selling ice creams.

You have to remember that entering these shows must have been a bold move in the mid-1970s. This was before England had a black player in the national football team. This was a time when black women were still highly exoticised, judging by some of the other pictures I have seen in the local newspaper. This was when the National Front was on the rise.

The picture is from a largely unlabelled set of negatives on loan from brilliant local historian Suz Foad. Apparently they were rescued from a skip when a local newspaper disposed of much of its own archives.

Please email me on margate@my-beauty.co.uk if you have any clues as to the identity  of or contact details for any of the women in this picture or on the website. It would be great to hear from you.

UPDATE: The woman in question is Beverley Heath-Hoyland.